Odds are you missed it, but my very first blog post was titled I Am Not a Runner. Fast forward five years, and today’s post easily could be titled I Am Not a Swimmer. Because I’m not. Seriously, I could (maybe) swim to save my life. But just as having no running experience didn’t stop me from signing up for my first marathon, why let a little thing like not being able to swim prevent me from signing up for a triathlon?

A little history:  The first time I attended any race at all was as a spectator when one of my best friends completed this sprint back in the late 1990s. She lived in the city, and because the venue was just 15 minutes from my house, she stayed at my place the night before. I dropped her off in the wee hours and then came back with my then small three kids in tow to cheer her on. I was immediately sucked in by the excitement, and I knew right then I wanted to be part of it. Then in 2012 my eldest son completed the same race, renewing my interest in being part of the racing scene.

Over the past five years, I have completed seven marathons, ten half marathons, a Ragnar relay race, and a number of shorter distance races. Still, the thought of completing a triathlon tugged at me. So last year, I decided to pull the trigger. I registered for this sprint triathlon on August 10, 2017, figuring I had a full year to learn to swim. Riiiiight.

The race is held in Naperville, Illinois, just about 15 minutes from my home. The swim portion of the race takes place at Centennial Beach, a man-made beach within what previously was a quarry alongside the DuPage River. There is a sand beach at the shallow end of the pool which has a zero-depth entry. Newly renovated in 2011, the beach/pool is popular among residents of this Chicago-area suburb.

Registration was online through Active. I signed up at the early registration fee of $60.00. Knowing myself and my procrastinating ways, I purchased cancellation insurance for the first time, just in case. It’s my M.O. not to train for races. Why should this be different? It wasn’t. Only in the few weeks before the event did I paddle back and forth in my backyard pool. If nothing else, I was pretty sure I wouldn’t drown.

Packet pickup was held in the basement of one of our local running stores. I picked up my packet on Saturday morning, surprised by the long line. A number of local races hold packet pickup at the same store, and I have never had to wait in line. The line went fairly quickly and was well organized – check in, receive your packet, receive your finisher’s shirt, have your ChronoTrack ankle bracelet linked to your bib number. The race shirt was unisex and my size small is huge on me. In a race where fifty percent of the participants are female, it’s disappointing not to have gender-specific shirts. Grrrr.

On Saturday evening I Googled my way into an absolute panic reading race recaps, most of which included nightmare stories of the swim portions of triathlons. Granted, many of these recaps were about bigger distance races, but still. I self-medicated with a nice glass of sauvignon blanc and set my gear out for the following day. I went to bed before 9:00 p.m., hoping to get a good night’s sleep. I slept pretty well and was happy to wake up on my own instead of by my alarm clock, which was set for just ten minutes later. I got up and got ready, had a cup of coffee and my usual pre-race breakfast of a double-chocolate muffin, a banana, and a handful of almonds. And of course lots and lots of water. 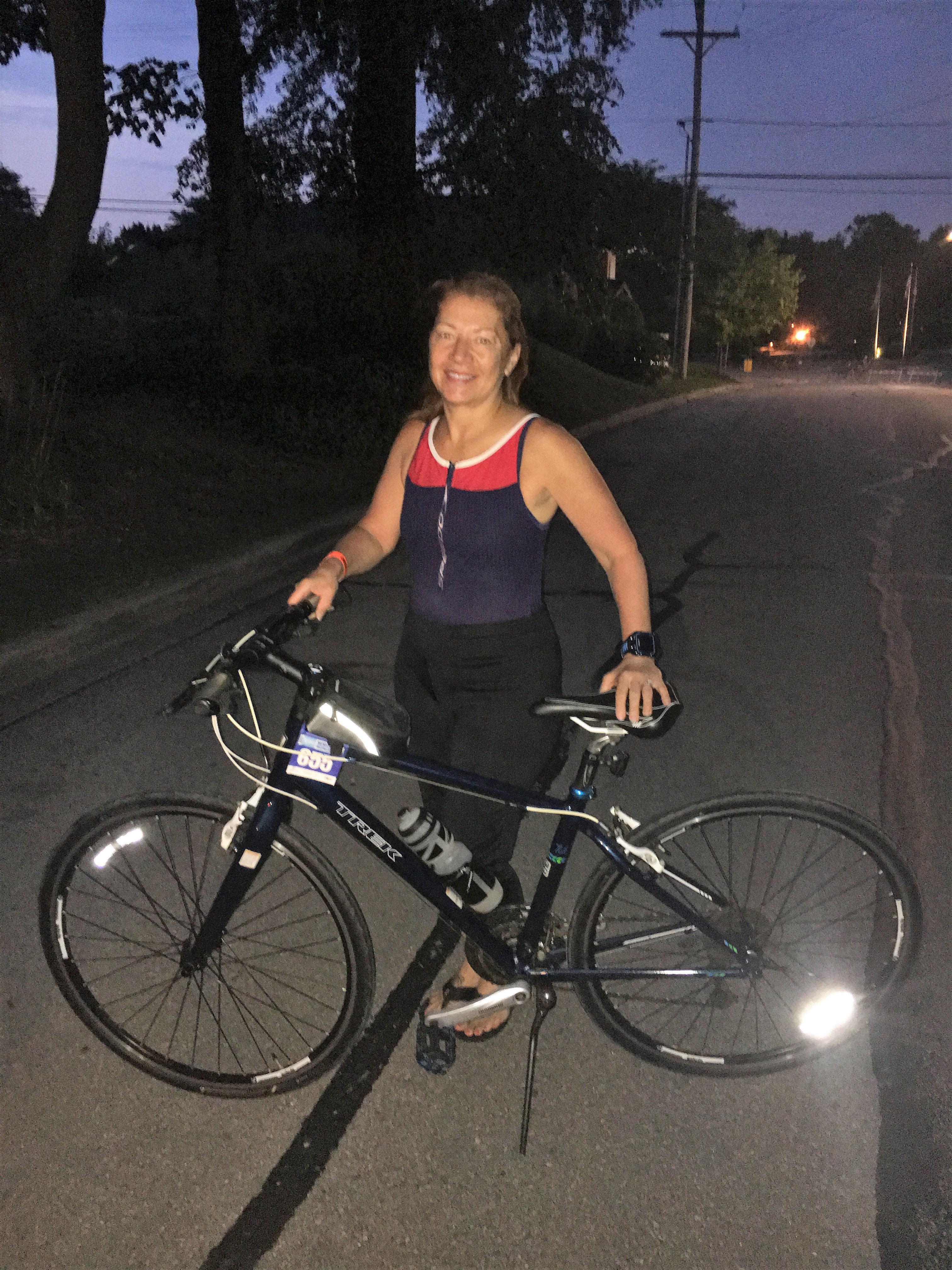 Bike check-in opened at 5:00 a.m. on race morning and was set to close at 6:45 a.m., leaving participants plenty of time to find their spots and get their transition areas ready. My husband  graciously drove me to the race, and I arrived at 5:30 a.m. I wanted to arrive early because I had no idea what I was doing. I checked in with the volunteers and my arm was marked with my bib number, while my left calf was marked with my age. Well thanks for that.

The racks were marked according to bib number, and I was happy to see I was positioned near the bike exit/entry (though I did realize that made for a longer distance to make my way from the swim area). I racked my bike and peeked around to see how others were setting things up, because I of course had no idea what I was doing! I laid out my gear and decided to hang around since there was plenty of time before the official start to the race. I started chatting with the ladies around me. We were all about the same age and coincidentally, three out of four of us are nurse practitioners! We joked that we could do CPR on each other if needed. Nurse humor at its finest.

We made our way to the ‘beach’ area and lined up near the back of the pack. Swimmers self-seeded according to posted signs. We lined up with the 10-12 minute swimmers, though I knew there was no way I could finish in that time. I seriously  hoped I would finish in around 30 minutes. My biggest worry was being kicked and knocked into during the swim, but those fears were quickly alleviated when I saw early on that the swimmers were nicely spaced, with four swimmers being released every 10 seconds. The swim made a backward ‘M’ pattern, starting in shallow water and with the downward point in the middle of the ‘M’ also being at a walkable depth. I could do this.

With roughly 2000 participants being released for the swim only four at a time, it was a full hour after the official race start before my new friends and I entered the water. Within just a few minutes a woman near me went into a full-blown panic, screaming and yelling, “I can’t breathe, I can’t breathe!” Alrighty, then. Lifeguards dove in the water to save her from herself and I continued on my way. Though I can barely swim, I’m not afraid of the water. I knew I would be slow, but I knew I could do it. I hit the shallow water at the bottom of the ‘M’ and exited the pool at just under 15 minutes. Score.

I anticipated my first transition would be slow, and I wasn’t in any particular hurry. I made my way to my bike and took my time drying off before pulling my shorts and top over my swimsuit. I heard a pop as my top went on. One of my safety pins from my bib had popped off, so I had to refasten it. I sat down and dried off my feet and put on my socks and shoes. I took a few swigs of my Tailwind, put on my bike helmet and sunglasses, and I was on my way. Transition 1:  6:05. Fine by me.

The bike leg made two counter-clockwise loops of about 6-1/2 miles each. Being so close to my home, I’ve ridden on these streets before. There wasn’t much in terms of spectator support, and there were police officers with their patrol cars monitoring traffic about every half mile. I wasn’t the fastest, and I wasn’t the slowest, and I passed more people than I had people pass me. I anticipated finishing in about an hour. Finish time:  56:51. Fine by me.

I didn’t expect much of the run. I got off my bike and my legs felt like jelly. I thought at first I would run back to the transition area, but my legs were having none of it. Not much to do at Transition 2, though – take off my helmet, redo my pony tail, take another few swigs of my Tailwind, and away I go. Transition 2:  3:35. Again, fine by me.

My official finishing time was 2:00:55 and I was beyond thrilled. With virtually no swimming skills and very little training, I was happy just to finish. Slow or not, I am officially a triathlete! Would I do this race again? You bet your bottom dollar! In fact, with a 60-hour window of an early registration fee of $60.00, I’ve already signed up for next year. And who knows? Maybe I will train for it next time around. Riiiiight.

Are you a triathlete? How was your first experience? Did you start of with a sprint, or with one of the bigger races? What is your favorite leg?

Copyright © 2022, The Accidental Marathoner - All Rights Reserved. The use of this Web Site is subject to the following TERMS AND CONDITIONS.
Designed by INT Creative Services