I would easily rank this as one of my absolute favorites. Entering the running world with the colorful and diverse neighborhoods of the City of Chicago as a backdrop, it is hard to find a race venue that can compare.

Enter the Napa to Sonoma Half Marathon, the premier event within the Destination Races series. I heard of this race from a friend, and to be honest, the first thing that drew me in was the amazing bling! An internet search of past races in the series showed medals displaying a wine theme, a very good fit for me and my love of wine. I heard these races sell out early, so while vacationing in Las Vegas, I left a winning table to go up to my room to register. That was a great decision, as I later learned that the race sold out in just 17 minutes. My luck at the table obviously stayed with me, as I was able to secure a spot!
Next it was time to plan. I booked my trip from Chicago to San Francisco, where I met up with a good friend the Friday before the race. A free upgrade to first-class seats was just the

start of an amazing weekend. We drove up to wine country on Saturday morning so we could start to enjoy this incredible event. Packet pickup and the race expo itself were great! There were more than enough volunteers and the process went very smoothly. The race organizers did right by the registrants whose shirts arrived in a smaller-than-expected size, offering the opportunity to order the appropriate-sized shirt to be shipped to their homes at no extra cost. They even let us keep the too-small shirts to keep or give away to a friend. The race expo included wine tastings with very knowledgeable staff available to answer all of our questions. Props were set up for the race participants to take some photos, which added to the fun.

he morning of the race my friend dropped me off at the spectacular Cuvaison Carneros Winery, where the race began. That, too, was well-organized, and none of the race participants seemed to mind the misty rain before the start of the race. There were plenty of porta-potties pre-race, and even the lines for them were very well organized. The pre-race music and the announcers themselves provided a very good vibe as we all eagerly awaited the start of the race. The path to the start gate was very well marked so participants could corral themselves in the appropriate place in line based on their anticipated finish times.

While the misty rain stopped before the race, the sun didn’t really break out until at least 2 hours after the start. No worries; the beautiful vineyards along the entire route shone brightly for all participants to enjoy. Volunteers along the route were fun and encouraging, helping to keep the runners motivated the entire time. There were enough porta-potties along the route, though on a few occasions the lines were pretty long, sometimes spilling into the race route itself. That is probably my only suggestion for improvement—to have the volunteers corral the people in line off to the side so they weren’t in the runners’ way.

What a special treat to approach three men handing out Guinness beer at about 9-1/2 miles into the race! Then as anticipated, the Gundlach-Bundschu Winery was handing out wine to runners at about 10-1/2 miles in. The excitement leading up to the finish started to grow at least ½ mile before the finish line. Plenty of spectators lined the streets as the runners started to file in. I was so thrilled to finish in almost eight minutes under my goal time. The course was pretty easy except for the “Butt Burner” hill near the start, and then a few other hilly areas along the route. 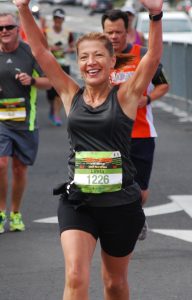 The post-race Wine and Music Fest was amazing. There were 2 beer vendors and at least 20 wineries offering tastings. While the lines were long, they moved very quickly and the fest participants were able to sample plenty of great wine. The souvenir etched wine glass will serve as a beautiful reminder of this incredible experience for years to come.

Overall, I would rate this one of the best races I have participated in. It was well organized from start to finish, and has plenty to offer to both novice and expert runners. I am already signed up for the Destination Races Santa Ba 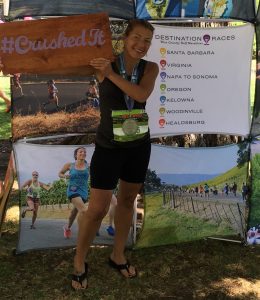 rbara Wine Country Half Marathon next May, and have made it my goal to complete all eight races in the series. These races are by no means inexpensive, and for those of us traveling, participating can be very costly. However, the price of participating is well worth it given the great experience and opportunity to explore wine country in such an amazing way.