Disclaimer:  I received an entry to the Byline Bank Chicago Spring Half Marathon to review as part of being a BibRave Pro. Learn more about becoming a BibRave Pro (ambassador), and check out BibRave.com to review, find, and write race reviews.

It’s been almost two weeks since I walked the Byline Bank Chicago Half Marathon and with my crazy-busy schedule, I only now have the time to sit down and write my recap! I’ve been swamped as always over the past few weeks, and now that I am at the tail-end of my trip to Puerto Vallarta I decided to write before I get back home to my usual craziness.

I’ve never run this race and I was excited for the opportunity to check it out. The race included both half marathon and 10K distances. I chose the half. All of the Chicago races I’ve previously run have taken us north along the Chicago lakefront, while this one would take us south. What better way to see new parts of this beautiful city than during a race? Packet pickup was offered at three different Fleet Feet locations in the days and weeks before the event. The Oak Park location would have been preferred, but I couldn’t make the dates so I picked up my bib, race shirt, and swag bag at the South Loop location, which is convenient to my work. Parking was free with a voucher, which was a nice treat! We received awesome race shirts and a nice little swag bag with lots of fun items, including a packet of flower seeds to help welcome in the spring!

As always, I was on constant weather watch before race day. Rain was predicted, and in the days before the race, morning storms were in the forecast. Word from the race organizers was they would be sending updates starting at 4:00 a.m. on race day. Not feeling very positive about the weather, I got my race gear ready and hit the sack early. I woke up at 4:15 a.m. and while my weather app still showed an 80% – 90% chance of storms throughout the morning, we were notified that the race was still on. At 5:00 a.m. the weather report as well as the notification from the race people remained unchanged. I strongly considered not going, but I’m no quitter! I got online, pre-paid for parking, and headed into the city. It poured during my entire 35 minute commute. As expected, there were street closures all around the route. I navigated my way around and found a way to enter the parking garage. Since it was pouring when I arrived, I sat in my car in the underground garage until 6:00 a.m. With a 7:00 a.m. race start, it was time to head outside. Much to my surprise, the rain had stopped completely. I walked the short (one city block, at most) distance to bag drop and dropped off my things. I mulled around a bit before heading to the start corrals. They were pretty organized and the volunteers were strict about placement. I found my corral and got in line as the temperature started to increase and the sky began to clear. The National Anthem was sung a few minutes after 7:00 a.m., and the first corral was off.

There was a bit of a wait and then finally at 7:25 a.m. my corral started. We headed south on Columbus and then east on Roosevelt Road toward the lake. We then turned south and under Lake Shore Drive and onto the Lakefront trail. We headed toward the Museum Campus and around the Shedd Aquarium and the Field Museum. I started out with my usual run/walk/run strategy, but early on my decrease in carb intake in the previous few weeks let me know I didn’t have much fuel in the tank. I decided at that point I would walk the entire race. After all, I could already see some of the elite runners heading back, so it’s not like I was going to beat any of them! We continued south past Soldier Field, Northerly Island, McCormick Place, and then into Burnham Park. We continued until our hairpin turn about 6-1/2 miles in at around 4900 South, and then back around the way we came. Once back around the Museum Campus, we continued north to Randolph and then headed west back to Columbus before turning south to the finish in Maggie Daley Park where an awesome Spring Market awaited race finishers, with volunteers giving out trays of flowers to plant! 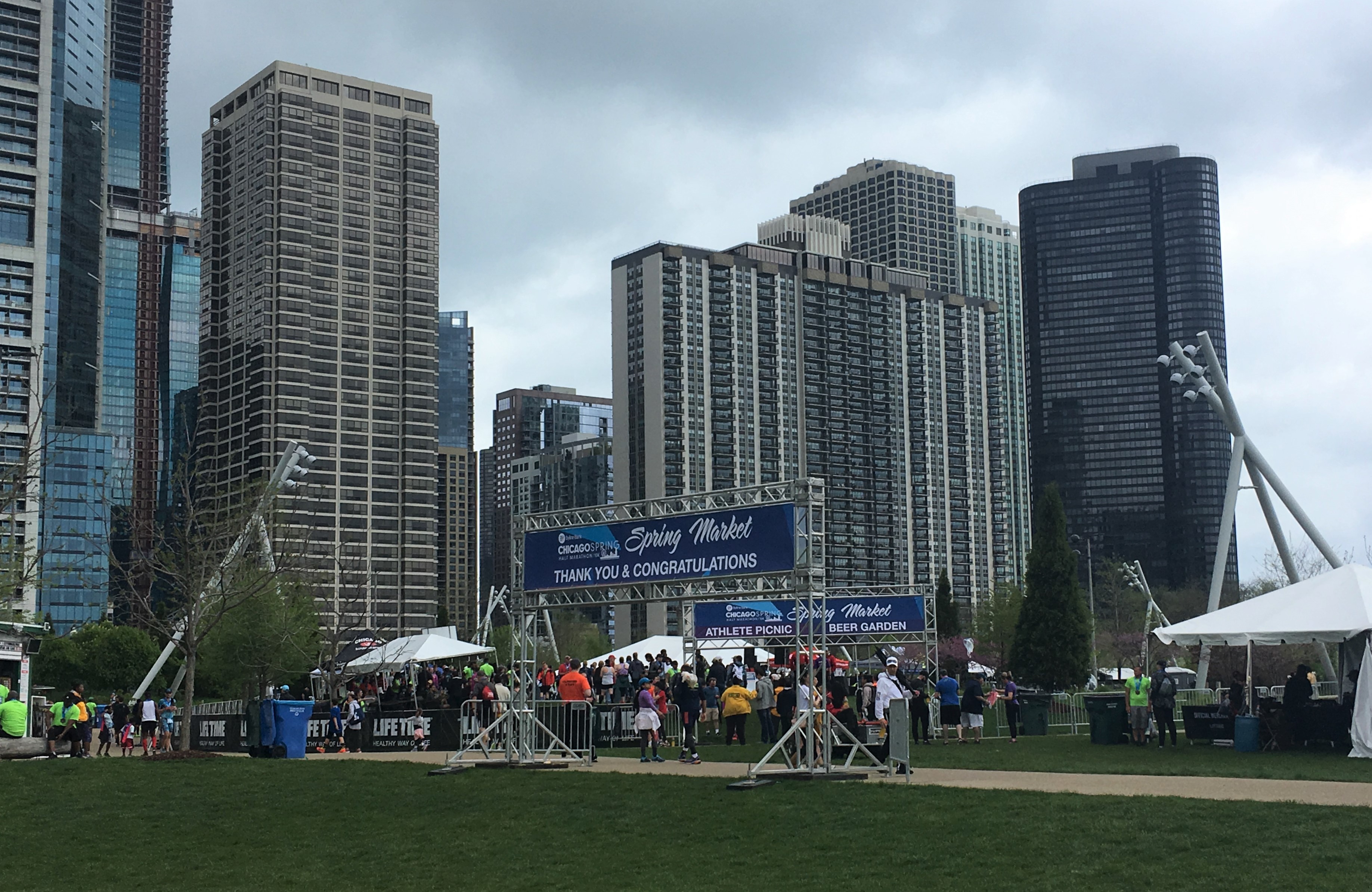 While there wasn’t much crowd support throughout the race, there were spectators scattered here and there, and in the final mile before the finish the crowds grew. And it’s always a thrill to hear your name as you cross the finish line! After receiving my medal and grabbing a water bottle, I quickly picked up my checked bag and then headed over to the post-race party, where an awesome breakfast was being served.

I grabbed some low-carb options and headed over towards the beer tent just to find a seat. I was pleasantly surprised to see a Bloody Mary tent. Yes, please! The kind folks manning the tent not only gave me a a couple of samples, they also gave me a bottle of their Bloody Mary mix, a jar of spicy pickles, and two coupons worth up to $8.99 off of any of their products!

I loved everything about this race and I will definitely be signing up again next year. Everything ran smoothly, packet pickup was a breeze, and luckily the rain held off the entire time. The finsiher shirt and swag bag were great, and the post-race party was a blast with an awesome buffet breakfast. The flowers were a special treat! I couldn’t wait to get home and make my own Bloody Mary using the awesome products from Suckerpunch Gourmet! And how cool is this medal?

Have you ever run this race? What’s your favorite post-race drink? Have you ever been to a race where Bloody Marys were served?

Other races I have on my calendar (so far) this year:

July 21:  Napa to Sonoma Half Marathon

On Sunday, November 3rd, I will be running the New York City Marathon as a charity fundraiser for Team in Training, an organization that helps The Leukemia & Lymphoma Society (LLS) support cutting-edge research projects in the most promising areas of cancer research. If you’d like to contribute to my fundraising efforts, you can still do so by clicking on the link below. Any donation, big or small, will help and is greatly appreciated!

Click here or on the picture to get to my fundraising page!

2019-05-30
Previous Post: Product Review: Orange Mud Gear Vest Pro
Next Post: May Runfessions and Running for a Cause

Copyright © 2020, The Accidental Marathoner - All Rights Reserved. The use of this Web Site is subject to the following TERMS AND CONDITIONS.
Designed by INT Creative Services